NoxInfluencer, based on influencer data brain and smart searching, has developed a marketing platform that helps brands and creators to establish friendly and win-win collaborations. Brands are able to launch social media marketing campaigns on NoxInfluencer and reach global creators across multiple platforms, from YouTube, TikTok, to Instagram.

When brand users create a campaign for their business promotion, NoxInfluencer will help to send bulk invitation letters to all chosen influencers that are included in the campaign invitation list made by the brand owner. Influencers who receive the invitation have the right to decline or accept the offer. When a campaign is approved by NoxInfluencer review team, campaigns will be published on NoxInfluencer site and creator users will apply for campaigns they are interested in. Also, brand uses have the right to decline or accept these extra applications from influencers.

Collaborate with global influencers and grow your business!

How to Run A Campaign

In this step, brand users can fill in the two basic information of the campaign, the title and the team member to co-work(optional). The campaign owner can add the bounden staff accounts or parent accounts as the co-working member.

When the basic information is filled in, a campaign is created. Brands can click “Next” to complete the campaign details filling, including information of the product to promote and the requirements of a promotion, or click “Skip” to go to make an invitation list first(Step Three). Please note that please complete the product promotion information before starting to invite influencers and getting the recommended influencer list from NoxInfluencer. 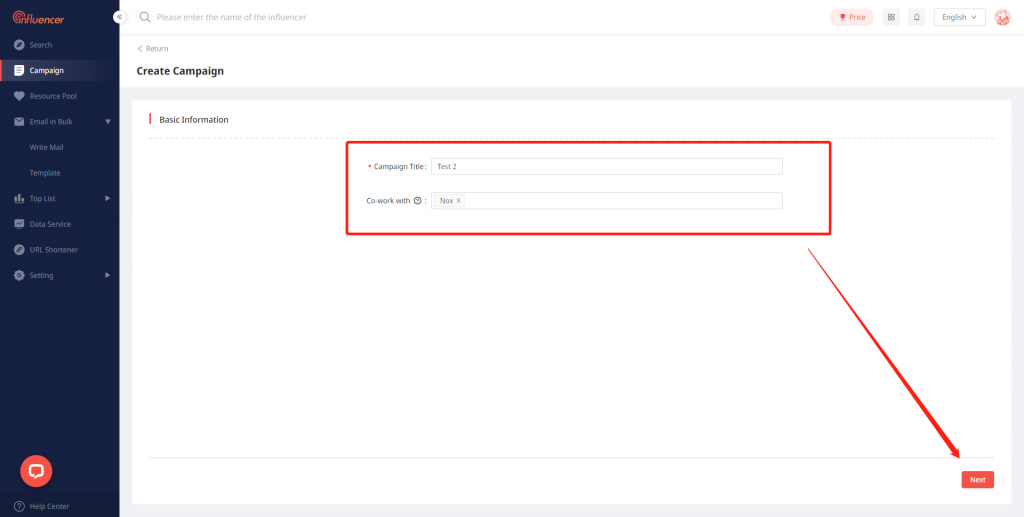 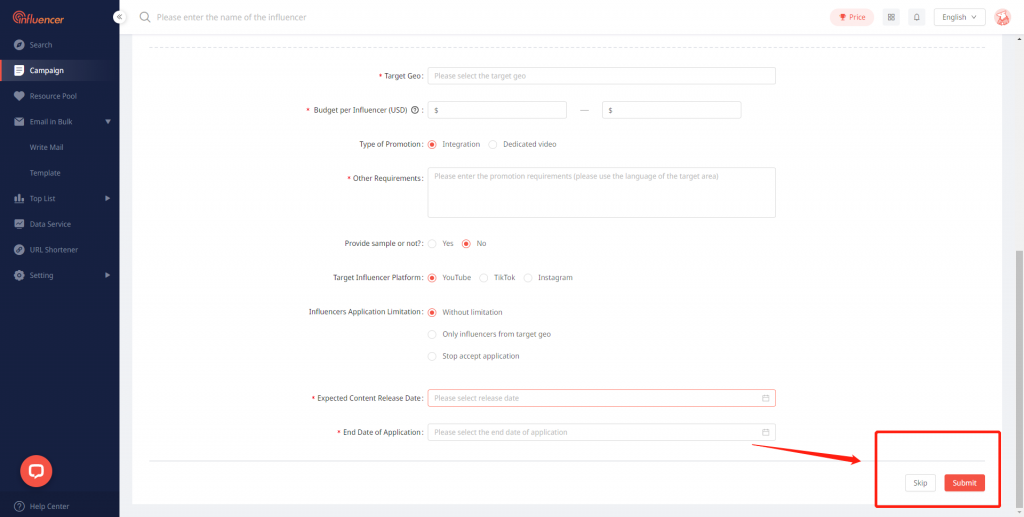 Campaign details can be filled in after clicking “Next” in Step One, or when entering a specific campaign from the campaign list. When everything is filled in by requirements, click Confirm to proceed with your campaign. When click confirming, the campaign will be forwarded to NoxInfluencer review team. 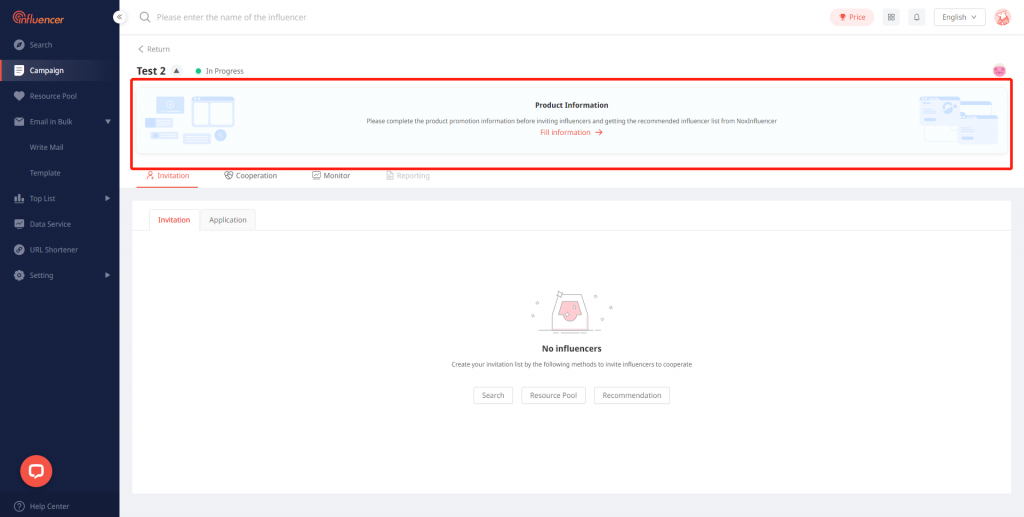 Entering a specific campaign from the campaign list, brands can add all influencers they want to cooperate with into the tab of “Invitation”, to make an invitation list. Users can add influencers from Search Results, Resource Pool, and Recommendation.

Users can add channels from search result page directly to the invitation list of a certain campaign. 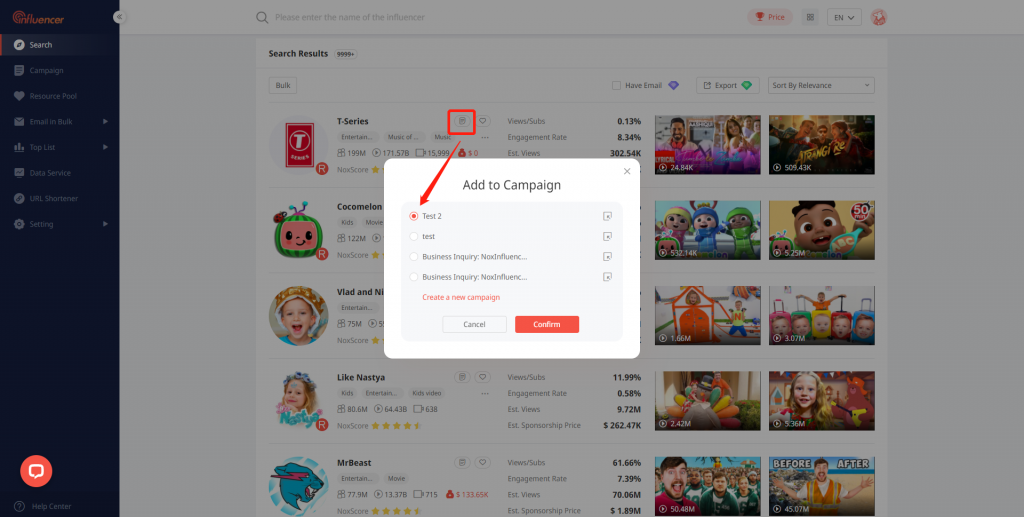 Users can import influencers from an already-built resource pool to the invitation list. Resource pool independent of campaign feature. Users, such as MCNs or marketing teams, can also build their own resource pool to manage creators’ information and data. See more about Resource Pool. 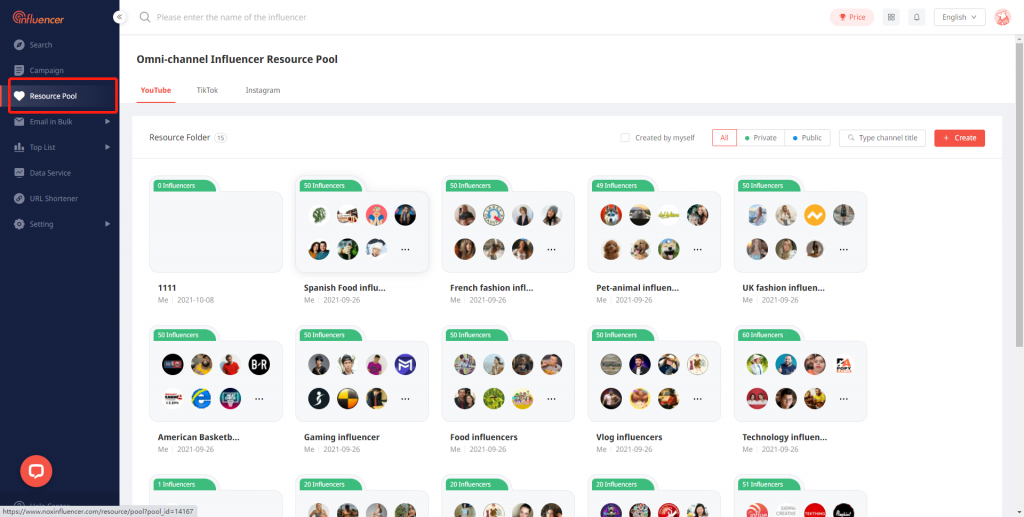 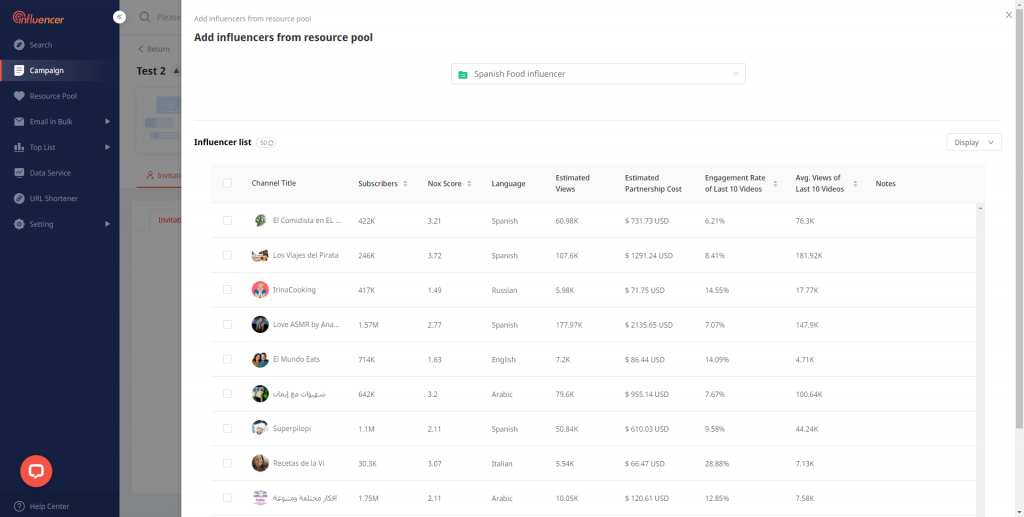 NoxInfluencer system will make tailored influencer recommendations based on the details of a campaign, such as promotion geo, product keywords, budget, etc. Users who want to quickly match a tailored invitation list for campaigns can use recommendations. 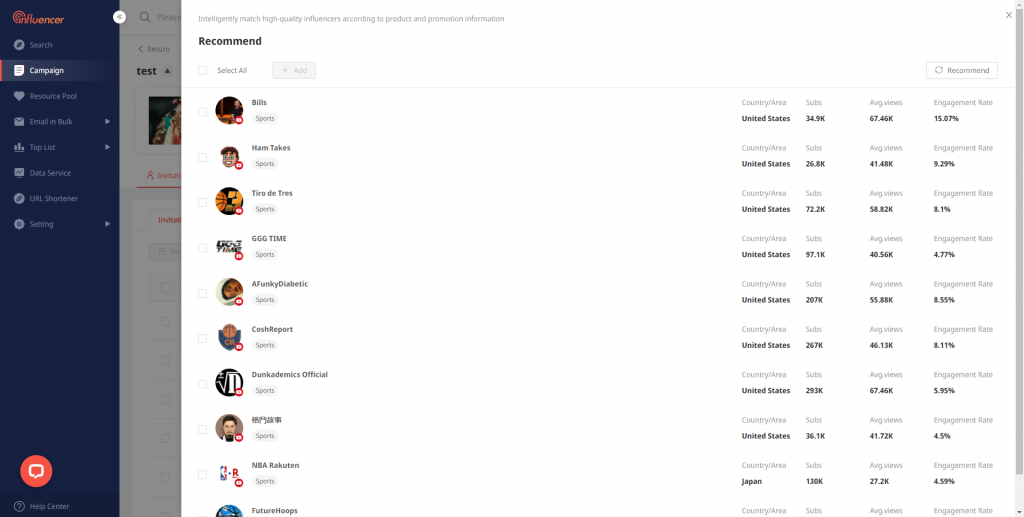 When campaign managers have an invitation list, they can start to send bulk collab letters about the campaign to those influencers on the list. Select all the influencers to be invited, and click “Invite”. Users will enter the page of mail writing. Users can write everything they want to tell to influencers to persuade them to collaborate.

On the page of mail writing, campaign managers have several options, save the mail as a template and choose a letter template.

(Note: When chosen influencers do not have contact information, they won’t appear on the recipient list of the invitation mail writing process, thus the invitation quota of a campaign won’t be used.） 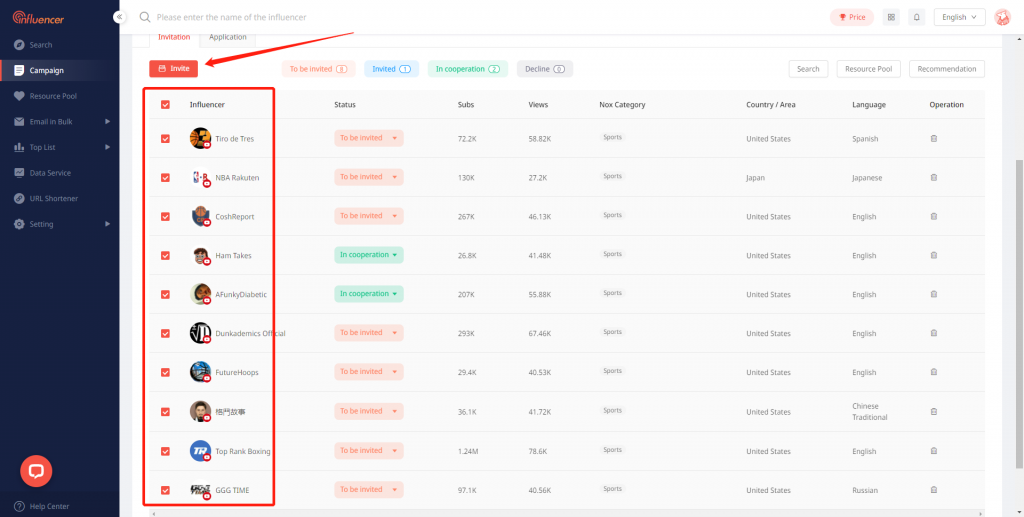 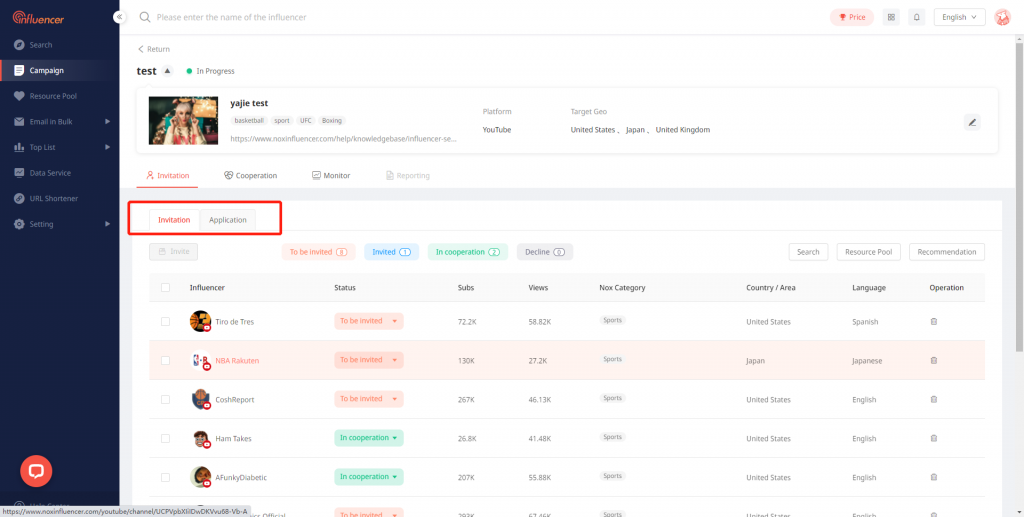 In the campaign list, all campaigns, including self-owned ones and co-managed ones(you are added as the co-working member), are displayed here. Campaign name, product name, and product image can be seen. Also, users can see the campaign creation time, campaign status, amount of influencers that are in cooperation. 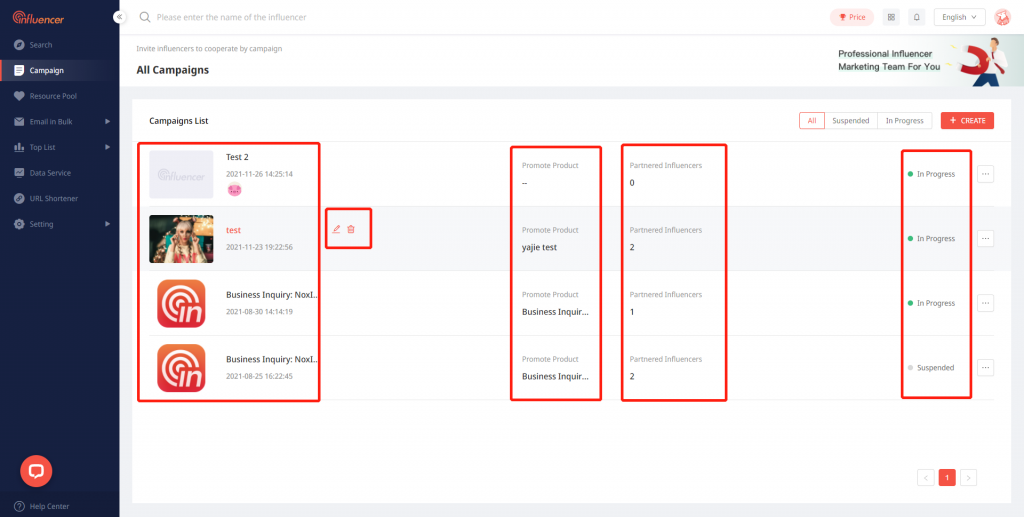 Users can delete or edit the campaign’s basic information and status by clicking the edit button on the list page.

On each influencer card, edit button allows campaign managers to add extra information about the partnered influencers, such as payment progress, shipment address, payment info. And contract and short links can also be generated in card.

Campaign managers can directly chat with partnered influencers by clicking the chat button. 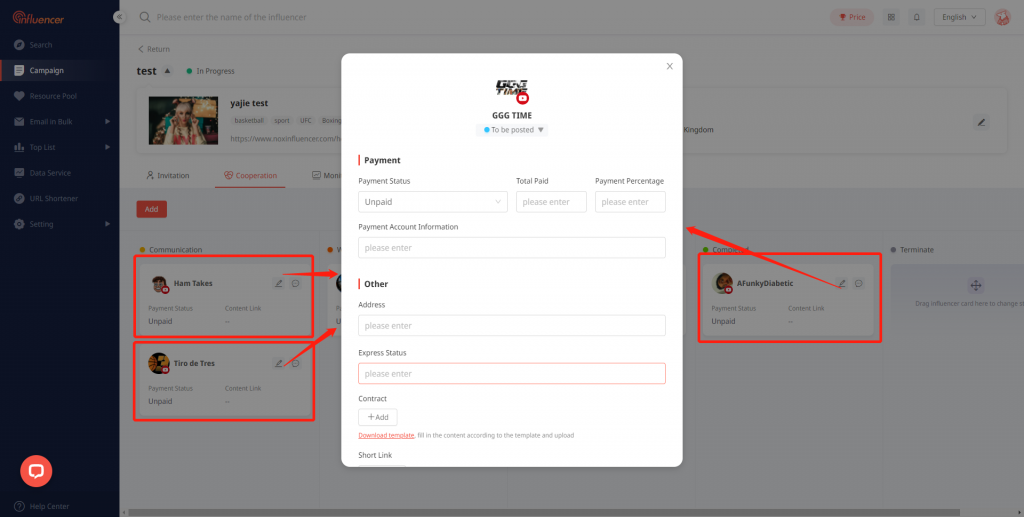 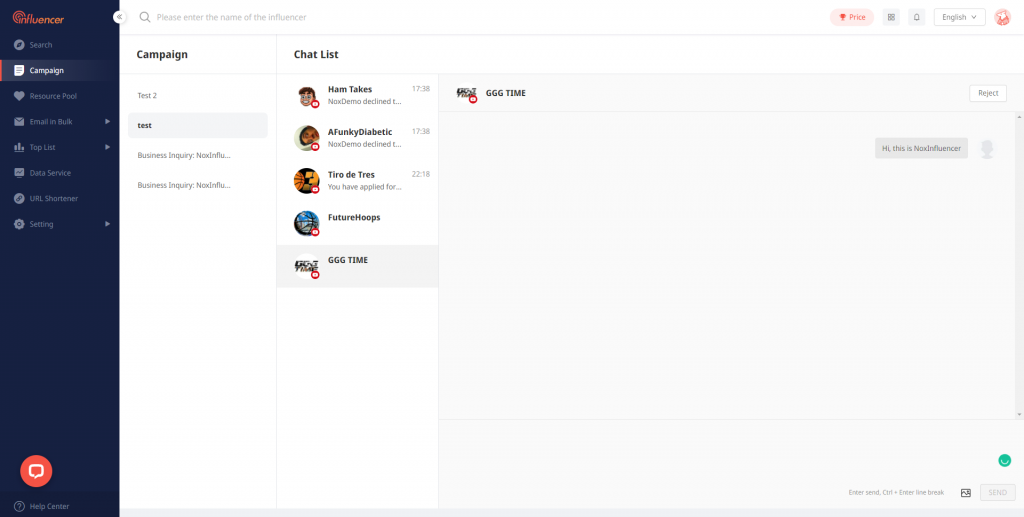 In the monitoring tab, campaign managers can add a monitoring project for every post/video of the campaign. Click the “Add” and input the YouTube/TikTok/Instagram link. NoxInfluencer will update the performance data with a frequency of 2 hours in the next 14 days. 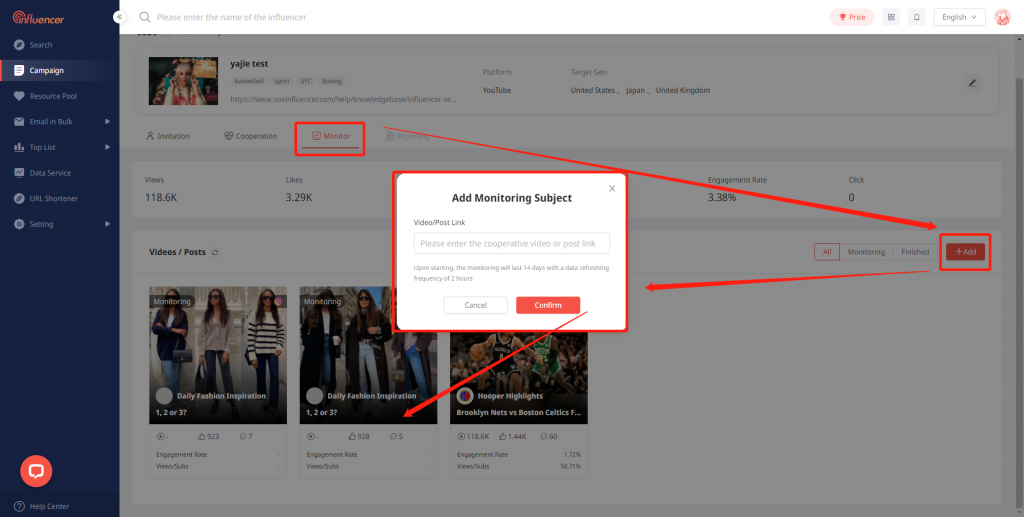 How to Help Influencers to Get Higher Video Rankin...
A Finale between PewDiePie and T-Series – Another ...
2021: Top 10 Indonesian Makeup YouTubers on YouTub...
New Features on Noxinfluencer 2020-04-24